Do you have a Lindsay in your family history? Maybe your Lindsay ancestor was associated with Edzell Castle.  The Lindsay surname is Scottish in origin and has many spelling variations.  In fact there are over 80 different spellings of the Lindsay surname. One of the Lindsay family branches settled in Edzell, in the region of Angus north of Dundee. Click here if you want help with your Lindsay family genealogy.

My recent visit to Edzell Castle inspired me to write about the Lindsay family and the history of their castle through the centuries.

Edzell’s first castle was probably a wooden structure built on a nearby natural mound in the 12th century. The mound is still visible today from the current Edzell Castle.

The Lindsay family acquired the land by marriage in 1358 when it became their main residence.  The original village of Edzell was located near the church by the first castle. The village has since relocated and the church is no longer there. However, the final resting place of the Lindsay family in the burial aisle is all that remains of the medieval church that once served the castle. 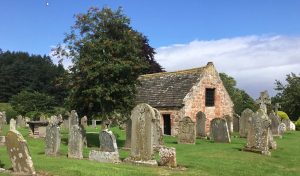 David Lindsay inherited the Edzell estate in 1513.  Seven years later, he decided to build a new Edzell Castle in a nearby location. 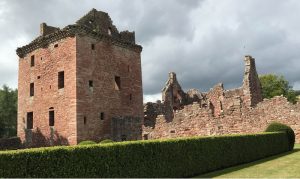 A kitchen with an impressive fireplace was built in the mid-1500s to provide the Lindsay family’s banquets. Meals remained similar to medieval fare. They included roast and boiled mats, poultry, fish and bread baked in the castle ovens.

Did you know that kitchen servants were known as ‘turnbronchies’. They kept spit roasts rotating continuously over the fire pit – possibly on the most tedious and uncomfortable jobs in the castle

Mary Queen of Scots visited Edzell Castle in 1562 when she was travelling around Scotland to emphasise her status as queen. The Lindsay family residence would enjoy further royal visits in 1580 and 1589 when James VI, Mary’s son, visited the castle.

In 1604, Sir David (the son of the previous David), designed and built a renaissance garden beside the castle. The design was influenced by his European travels and reflected his education. 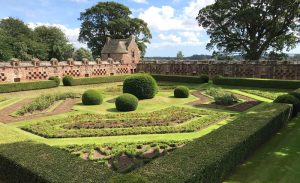 The architectural design of the garden is unique in Scotland. Around the walls, there are elaborate carved panels portraying the 7 Cardinal Virtues, the 7 Planetary Deities and the 7 Liberal Arts.  The panels offered guidance on obtaining a good education, maintaining high morals and the guiding power of heaven. 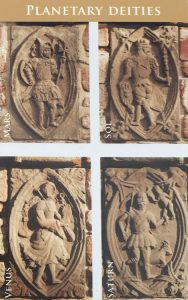 In the corner of the garden was the summer house, still intact, where guests could have sweetmeats after a meal. Today, modern summerhouses entertain guests with a gin and tonic, rather than sweetmeats. 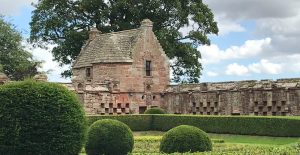 The last Lindsay Laird of Edzell inherited the estate when there were many building issues.  Unfortunately, he squandered what remained of his inheritance until forced to sell his property to the Earl of Panmure in 1715.  The estates were soon confiscated from the Earl for his part in the Jacobite Rebellion. The castle’s days as a noble residence with its elaborate banquets were finally over.

The estate eventually became the property of the Dalhousie family. The 16th Earl of Dalhousie built a cottage on the side for the castle’s caretaker.  In the 1930s, the garden and the castle were taken into state care. Some of the Earls of Dalhousie are buried in the old Edzell churchyard.

Today, the caretaker’s home acts as a visitor centre and both the castle and the gardens are maintained by Historic Scotland.

Good luck in tracking down your Lindsay family history.

If you enjoyed reading about the Lindsay family and their Edzell Castle, then leave a wee comment below.

2 thoughts on “The Lindsay Family History at Edzell Castle”