Rob Roy MacGregor lived in the 18th century in a beautiful glen (valley) where the village of Balquhidder is located. Recently, I visited the village and wanted to share its fascinating history about Rob Roy, the MacLarens and early Christianity.

Balquhidder is located about 10 miles northwest of Callander in central Scotland. Many visitors are drawn to the Glen for its scenery as well as the stories of Rob Roy who was a MacGregor. Others come searching for their roots. Their roots might also include MacLarens, MacGregors, Stewarts, Fergusons, MacNabs, MacIntyres, Buchanans and Campbells. All of these names are associated with the area. However, even if your name is not one of these, you may still have link through one of the branches or septs.

People have been worshipping in Balquhidder for hundreds of years. The Celts first recognised Balquhidder as the ‘thin place’ where the line between God and man, heaven and earth are very thin. After the Picts converted to Christianity, a Christian monk called Angus settled in Balquhidder in the 7th or 8th century. Angus apparently blessed the Glen where the house ‘Beannachd Aonghais’ (Blessing of Angus) stands today. Meanwhile, he built a stone oratory nearby where people would gather and listen to him about Christianity. Angus was buried on the hill where the present church stands. There is a stone altar inside the current church carved with the figure of a priest holding a chalice, or the cup of salvation. It is known as ‘ Clach Aonghais’, the Angus Stone.

The Hill of Fire (‘Tom-nan-Aingeal’) stands behind the church. At Beltane, 1st of May, and Samhain, 1st November, the Druids lit sacred fires. Most importantly, this encouraged the ancient gods to continue bringing warmth to the earth.

The MacLarens were the earliest known inhabitants of the Glen. They took their name from Abbot Labhran who built a stone church, ‘Eaglais Beag’ (little church), over the grave of St Angus. As founder of the church, his heirs claimed the right to be buried within the church walls. The MacLarens fought at Flodden in 1513. In addition, they participated in the Jacobite Risings of 1715 and 1745. According to an 1868 memorial in the Balquhidder churchyard, 18 MacLaren families were murdered by the ‘incendiarists from Glen Dochart’ in 1558. The ‘incendiarists were the MacGregors who apparently took over their farms and settled on their lands.

Today the current MacLaren chief and his family live in the Glen.  Located on their property is the cairn ‘Creag an Tuics’ (Boar’s Rock) which is the rallying place of the Clan.

The MacLarens have always populated the Glen.  However, its most famous inhabitant was Rob Roy MacGregor. He was fluent in English and Gaelic, and he was also famous for his strength, agility and swordmanship. Additionally, he was a cattle drover and dealer, Jacobite and leader of his clan. The Duke of Montrose was his patron who later turned against him because Rob owed him money. As a result, the Duke declared him an outlaw and his family were evicted from the Glen. Nevertheless, Rob is perhaps best remembered for his daring exploits during his outlaw years which made him a folklore hero. Similar to Robin Hood, he helped the poor and was always a step ahead of the law. In particular, he was romanticised in the novels by Sir Walter Scott who claimed that Rob Roy had unusually long arms. However, there is no evidence to suggest he had. 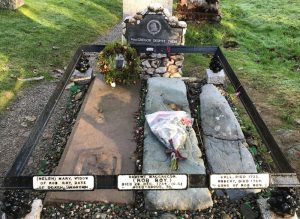 His gravestone is located at the Balquhidder churchyard where there is a plaque with the inscription ‘MacGregor Despite Them’.  It is a defiant response to proscription. This was the action to ban the use of the surname MacGregor and prevented clansmen to enter into legal contracts. The proscription was finally lifted in 1775. 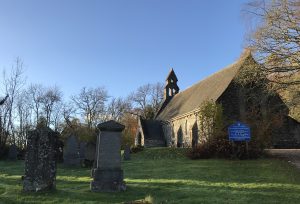 The churchyard also has graves of:

Are you related to any of these people?  Contact me if you want my help to search your ancestors.

Leave a comment below if you belong to the MacGregor or MacLaren family.