Behind the Name – the MacLellan Surname

Following on from my last blog on the Scottish Henderson surname, this month I am writing about the MacLellan surname.  If you have Scottish family history with MacLellans as ancestors, then this blog post might be of interest to you …

MacLellan Castle and its Laird’s Lug

A powerful lowland family, the MacLellans were numerous in Galloway from the 14th century. Galloway is located in the in the south western part of Scotland. Their name was given to the parish Balmaclellan, or MacLellan’s town, located north of Kirkcudbright in Galloway. Kirkcudbright is a lovely coastal town with MacLellan’s Castle at its centre. The castle was built about 1580s by Thomas MacLellan of Bombie as a town house, not a fortification.  The family sold the castle in the mid-1800s to the Earls of Selkirk who owned it until 1912.

There is an interesting feature behind the great hall fireplace where there is a peephole.  On the other side, there is a small room called the “Laird’s Lug” where conversations in the hall could be overheard. Today, you can visit the castle which is looked after by Historic Scotland.

Its clan crest is unusual with a moor’s head on the point of a dagger. 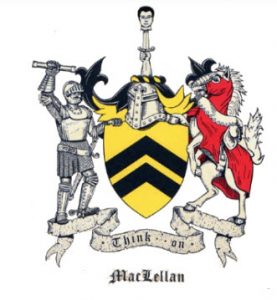 The story goes that in the 15th century there were many robbers in Galloway. So much so, that King James II of Scotland promised a reward to anyone who would disperse them and for the capture of their chief, dead or alive.  Their chief was Black Morrow, also known as Black Murray, who was a bandit living near Kircudbright. Sir William MacLellan, with the help of his friends, dispersed the lawless band and killed Black Morrow.  He carried the bandit’s head to the king on the point of his dagger. The king was reluctant to pay the reward, however Sir William advised him to ‘Think On’.  Afterwards, the king rewarded him by restoring estates back to the McLellan family.  To perpertuate the memory of this event, the Moor’s head on a sword became the origins of the clan crest with ‘Think On’ as its motto.

A prominent McLellan was Sir Robert MacClellan (died 1641) who was the baron of Bombie, Galloway.  He became Gentleman of the Bedchamber to the Scottish King James VI, who also ruled as King James I of England, and then King Charles I.  Consequently, he was later knighted with the title 1st Lord Kirkcudbright.

Sir Robert may have rubbed shoulders with John McLellan (c1609 – 1651) wo was also from Kirkcudbright. John was a Presbyterian minister who claimed he had the gift of prophecy.  He apparently prophesied that Lord Hamilton’s royalist army would be defeated in 1648 – which it did.

Over the pond, George McClellan (1826 – 1885) was an U.S. soldier, army engineer, railroad executive and politician. Nicknamed “Little Mac”, he was a major general during the Civil War. George was removed from the war by Abraham Lincoln in 1862 because he was reluctant to attack the Confederacy. His son became mayor of New York City from 1904 until 1909.

Today, the MacLellan clan does not have a chief.  Therefore it is considered to be a dormant or an armigerous clan.

If you like my blog series on Scottish surnames or how to research Scottish family history, then be sure to check out my blog next moth. Alternatively, contact me to discuss if you would like me to research your family tree.

If you have any questions about this blog, or if you would like to share your own ideas about how family history is important, then leave a comment below to start a discussion….